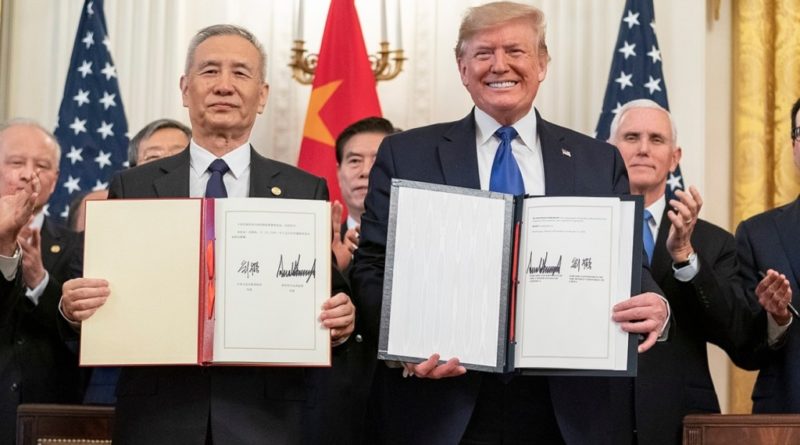 I am pleased to see the U.S – China trade deal that has now been signed by President Trump and Liu He of China. The agreement calls for an increase in purchases of agriculture products and goods and services produced in the U.S. It is the purchase of goods from which the U.S. will benefit the most. To quote my father “to have a stable economy you have to turn a raw material into a finished product.” Now with the expectation of more finished products being purchased by one of the world’s largest economies the prospects of America’s big boom continuing is improved.

With intellectual property rights and technology addressed in the agreement I hope the U.S. can prevent the rampant theft by the Chinese. This appears to have been a top issue by the President.

Helen Raleigh offers her take on Phase One in her article carried by The Federalist.

The Phase One U.S.-China Trade Deal Is A Serious Win For The United States

The U.S. shouldn’t be complacent after winning the first round of the trade war. China is a formidable strategic competitor and will remain so for many years to come.

I was very skeptical when U.S. and Chinese officials announced the two nations had reached a “Phase One” trade deal last December. Neither country released any details regarding the agreement. Chinese officials have been exceptionally muted since the announcement, only emphasizing that the United States would remove a number of tariffs, without mentioning any commitments China had made. Neither the United States nor China even articulated a specific dollar amount of the additional U.S. farm products China pledges to purchase.

Last week, both the White House and the U.S. Trade Representative’s Office posted the full text of the agreement, immediately after Chinese representative Liu He and President Donald Trump signed it. Upon reviewing the 96-page document, I have to admit, I was wrong. This Phase One deal, although still leaving many strategic goals unfulfilled, is a much better deal to the United States than I initially thought.

The mainstream media has been focusing on the additional amount of U.S. goods and services China has committed to purchase as the highlight of the agreement. However, they have missed the point. This agreement doesn’t start with China’s additional purchasing commitment, but with two top concerns in American businesses: intellectual property rights theft and forced technology transfer. The way this agreement is structured illustrates that, despite Trump’s rhetoric on trade imbalance, he values the ability to protect U.S. intellectual property rights and technology more than America’s additional exports.

The first chapter of the agreement is on intellectual property, and at 20 pages long, it is by far the longest chapter. It is incredibly detailed and covers a wide spectrum of topics, including trade secrets, confidential business information, pharmaceutical data, patents, piracy and counterfeiting on e-commerce platforms, manufacture and export of pirated and counterfeit goods, etc.

Within each item is a clearly identified enforcement mechanism. All the United States has to do is to “affirm that existing U.S. enforcement procedures permit action by right holders.” This phrase is repeated throughout all enforcement sections.

The agreement also eliminates “any requirement that the holder of a trade secret establish actual losses as a prerequisite to initiation of a criminal investigation for misappropriation of a trade secret.” Furthermore, it speeds up the criminal proceeding for intellectual property rights violations.

These changes are a tremendous relief for American businesses because they are the ones currently bearing the burden of proof for any trade secret misappropriation, and are required to establish an actual loss as a prerequisite for any criminal proceedings. Numerous American businesses handle their losses resulting from intellectual property theft quietly because bearing the burden of proof and establishing actual loss are both a costly and time-consuming endeavor.

Besides holding Chinese businesses accountable, the agreement also spells out how to hold the Chinese government and government employees accountable, stating, “China shall prohibit the unauthorized disclosure of undisclosed information, trade secrets, or confidential business information by government personnel or third party experts or advisors in any criminal, civil, administrative, or regulatory proceedings conducted at either the central or sub-central levels of government in which such information is submitted.” Furthermore, the agreement stipulates China cannot “require or pressure” U.S. businesses to transfer their key technology in exchange for market access.

This is a huge improvement from the status quo, in which Chinese government officials often demand that American businesses hand over key technological know-how when they apply for licenses to operate in China or conduct other investment activities. Chinese government officials are also known to demand that American businesses disclose information about key equipment during routine visits to business sites in China.

China hasn’t historically lived up to its enforcement commitments, so this agreement stipulates very specific deadlines for various targets. For example, under the section on counterfeit medicine, the agreement requires that China publish “online annually, beginning within six months after the date of entry into force of this Agreement, the data on enforcement measures, including seizures, revocations of business licenses, fines, and other actions taken by the National Medical Products Administration, Ministry of Industry and Information Technology, or any successor entity.” There are many similar deadlines within the agreement, and some are as compact as 20 work days.

Before the contents of the trade deal became public, the media reported only that China would increase its imports of U.S. agriculture produce to about $40-$50 billion over two years. This led many to question whether President Trump started his trade war with China and put the global economy through more than 18 months of uncertainty only for soybeans.

Now we have learned China pledges to purchase way more than soybeans. In fact, China has committed to increase imports of U.S. goods and services by no less than $200 billion over the course of two years, between Jan. 1, 2020, and Dec. 31, 2021. According to the trade agreement, the purchase increase will come from four industries: $77.7 billion worth of manufactured goods, $52.4 billion worth of energy, $32 billion in agriculture, and $37.2 billion in services. Moreover, the agreement expects such increases to “continue in calendar years 2022 through 2025.”

Keep in mind that before the U.S.-China trade war started, U.S. exports to China were only about $130 billion in 2017. Expansion of U.S. exports to China, as the trade deal mandates, is unprecedented and will be a huge boost to the U.S. economy for several years to come.

If China fails to deliver, the agreement says the United States will unilaterally reimpose tariffs on Chinese goods. Economists and China’s other trading partners, such as countries in the European Union, have already raised questions about whether China will have to reduce purchases from all other trading partners in order to fulfill their new trade obligations to the United States.

It is also worth pointing out that the Trump administration is able to achieve all of the above for U.S. businesses, while paying a relatively small price. The Trump administration stopped calling China a currency manipulator. The United States agreed not to impose new tariffs on the $156 billion in consumer goods that were going to take effect this past Dec. 15.

The U.S. Won this Battle, but the Trade War Continues

Of course, the devil is always in the implementation. Whether China will actually deliver and the enforcement mechanism will work as planned are big questions. Still, this deal on paper is the best the U.S. government has achieved in several decades of any trade negotiations with China.

This explains why the Chinese government has kept quiet about the details of the Phase One agreement since the December announcement about the deal being reached. China also waited eight hours after last week’s deal-signing ceremony to publish an abbreviated version of the deal’s text in both English and Chinese. In contrast, the White House posted the full text of the agreement immediately after the signing ceremony.

While I applaud President Trump for making such an important breakthrough in the U.S.-China trade relationship, I remain convinced that a trade deal won’t change or even slow the strategic competition and confrontation of the two nations. This Phase One deal leaves many U.S. strategic goals out, including addressing the Chinese government’s enormous subsidies to state-owned enterprises. The two countries have such different economic and political systems and, more importantly, such different sets of values that we may have to settle our differences through other means, far beyond a trade agreement.

China’s vice chair and chief trade negotiator, Liu He, said he hopes China’s commitments on intellectual property rights protection, technology transfer, and financial markets will incentivize Chinese firms to innovate and develop “made-in-China” solutions that someday won’t rely on foreign companies. His words are a reminder that the United States shouldn’t be complacent after winning the first round of the trade war. China is a formidable strategic competitor and will remain so for many years to come.

Helen Raleigh is a senior contributor to The Federalist. An immigrant from China, she is the owner of Red Meadow Advisors, LLC, and an immigration policy fellow at the Centennial Institute in Colorado. She is the author of several books, including “Confucius Never Said” and “The Broken Welcome Mat.” Follow Helen on Twitter @HRaleighspeaks, or check out her website: helenraleighspeaks.com. 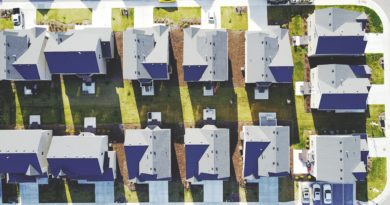 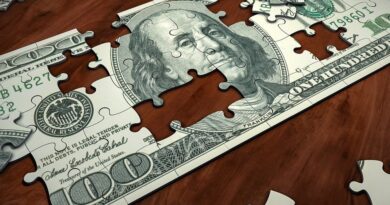 One thought on “U.S. Big Winner in China Trade Deal”